"Usor e de castigat, greu e de pastrat" is an old Romanian proverb which translated equates to "Keeping is harder than winning". On Saturday at a relatively balmy Ringcommons CC, an undectet of middle-aged and (mainly) former cricketers from NIACUS went some way to disproving that theory as, for the first time in 17 years, they retained the White Stick trophy.

This match had been an eagerly awaited one, coming almost one calendar year after the most one-sided match in this illustrious trophy's history, and the Leinster umpires and scorers were understandably eager to exact revenge. Indeed, the appointed skipper, Steve Wood, had, allegedly, been overheard in conversation with last year's captain, Paul "Renno" Reynolds, stating "But I'll tell you Renno - you can tell him now if you're watching it - we're still fighting for this White Stick and he's got to go to Ringcommons and get something, and ... And I tell you honestly, I will love it if we beat them, love it"

So the stage was set, the weather Gods for the first time in several years of this fixture played ball, I picked up Gary "Gusher" Blair, and our band of merry men made the border crossing, heading south to the townland of Naul, and to Ringcommons CC. On arrival, however, a surprise awaited us. There was Steve, but where was Renno? Nowhere to be seen. Had he been dropped, we surmised? As it turns out, he was unavailable, but he sent his twin brother down to watch for quite a while instead. Worse was still to come, as Steve himself broke the news that he too was not going to feature, a dodgy back preventing him from taking his place at the forefront of the Leinster charge.

Step forward the stand-in skipper, none other than Mr Willie Clarke. Not one to be hiding his light under a bushel, it was clear that Willie meant business. As we strode out for the toss, which he duly won, he confidently and without hesitation, asked us to have a bat.

This decision soon looked to be an inspired one as Willie himself led from the front (did you know he took 8/5 in a match this year) and, in tandem with the "Colombo Express", Sum Wijesundera, kept a very tight grip through the opening overs. Our top order must have nipped down to Gorey, Co Wexford, for some batting coaching from last year's hero Mr Wood (who can forget his rearguard effort from 2017, much as we may want to?). An unusually becalmed Ronnie Balfour and his partner Dick Treacy never looked in serious trouble, but runs were at a premium and the highlight of this opening spell, for all involved, was when Ronnie wore one in the most tender of all locations, and play had to be stopped for several minutes to allow a recovery. Ronnie was first to depart and Brian Alexander joined Dick but the Leinster change bowlers, Raj and Roger Kerr, were as parsimonious as their opening partners and the run rate struggled around the 2 per over mark.

Some impetus was given to the innings from an unlikely source. After several years of complaining about his position within the NIACUS batting lineup, an opportunity was handed to the (charitable description) loquacious Dessie Milne to have a go up the order. He showed some intent and whilst only scoring 7, he wasn't going to go gently into that good night. During his brief, but entertaining, cameo he also managed to provide a moment of levity, one which won him the coveted Champagne (well, Prosecco if we are being strictly accurate) moment. After one delightful nudge for a quickly run 2, he came sprinting off the pitch, carrying an unidentified object with him, When questioned on his arrival at the pavilion steps he announced, without hint of a joke, that he couldn't breathe with his teeth in, and promptly returned to the crease, sans dentures! I think I have now probably seen all that needs seeing on a cricket field!

Anyway, Dessie exited stage left soon after to be reunited with his incisors, and with the scoreboard reading 37/2 in the 18th over I went out and decided to throw caution to the wind. The scorebook does make pleasant reading, but to add some context, the following are noteworthy - dropped by Seaver early (difficult one, to be fair to Aidan), lobbed one over cow (Will has been called worse I am sure) who was ten yards in for 4, dropped by second cousin, once removed, N Walsh, (twice), and should have been run out (by said "relative"). But apart from that it was good fun and I found a willing and like-minded partner in Billy Adams and he bludgeoned a quick 38* as well to take us up to 155/5 in our 30 overs, a competitive enough looking target. I should point out that later, on social media, Robin Haire (Knights selector) questioned whether I had scored more runs in the White Stick than I had in my entire Lisburn career, a harsh, yet brutally fair, assessment of my change in fortune in the latter/last stages of my playing days.

After an all too brief break, we were back at it, knowing that the Leinster lads looked like they had a couple of handy operators with the bat, coupled with the fact that with Steve not playing, we didn't know who to try to keep in! However, we got off to a decent enough start, with new keeper Kevin McConville taking a sharp one off the bowling of Adam Gardner to justify the executive decision made (it has to be said without his full approval) to put Dessie in the outfield. Billy Adams removed the other opener, Will Houston, shortly thereafter and when Jonny Kennedy extracted an lbw decision for the 3rd wicket, we were in command. Colin Latham came into the attack and bowled tidily, and was rewarded with a wicket with the slowest recorded legal delivery in cricket history. His offering to the unfortunate Aidan Seaver was one that would make Ivan McCombe's stock ball look like a Brett Lee yorker, and Aidan could have had about four swings at it had he not resigned himself to his fate and marched off. The ball hit the stumps just as he was removing his pads.

However, a fightback was then launched by Leinster, in the shape of Roger Kear, who took a liking to the bowling on offer. He hit a rapid 43 off just 34 balls to bring his side back into contention and it was relief all round when he scooped one to the obliging hands of Dick Treacy, off the bowling of Colin. But there was fight still left in the long Leinster lineup as Raj and Sum took up the challenge, adding a further 30 before I bowled the unlucky Raj off his pads. Another couple of quick ones fell and, at 100/8, we looked home for all money, particularly with this being effectively 100/9, as the Leinster No.11 was a no show and has subsequently been removed from Willie's Xmas card list. But it was the skipper himself who settled in, as last man, and he and Sum kept the home side in the hunt. Although 27 were needed with 2 overs left, a Sum 6 and a couple of singles left us feeling a tad nervous, but thankfully Sum didn't quite get hold of another attempted maximum off the bowling of JK, and I was grateful to take the catch at long off to leave us the victors by 18 runs.

This was another tremendous battle in the series and was played, as usual, in a great spirit. There was plenty of chat about, but with Willie and Dessie in opposing ranks, this was to be expected. Indeed, as the sad news filtered through of the passing of Chas from Chas n Dave, it was perhaps fitting to note that there was indeed more rabbit than Sainsbury's both during and after the match. After a fine meal, a few pints of the dark stuff, and some incessant talking from Dessie (another Chas n Dave line springs to mind) it was time to bid farewell for another season. I was mindful of my wife's last words as I left the house that morning when she cautioned me against bringing "that big, ugly thing back home" so I dropped Gusher straight back to Annahilt. Peter Searson also kindly agreed to engrave the White Stick Trophy on our behalf and has promised to deliver it in person to our Chairman, Phil Thompson, who missed the trip in favour of being on hand to witness Man U getting a hard-earned point against Wolves. It will now take pride of place on Phil's mantelpiece for another season.

A final word of thanks, First to said Mr Searson for his administrative duties for the day. Secondly, to umpires Martin and Srini for their time (and patience). Thirdly to our delightful scorers, the wonderful Stella and Helen for their expert recording of affairs - kindly enclosed. Fourthly, to Ringcommons CC for hosting, a very good venue for the event. And finally to all those who participated on both sides in what was a very enjoyable and closely fought game of cricket. Winter well, colleagues, and we shall see you next season. 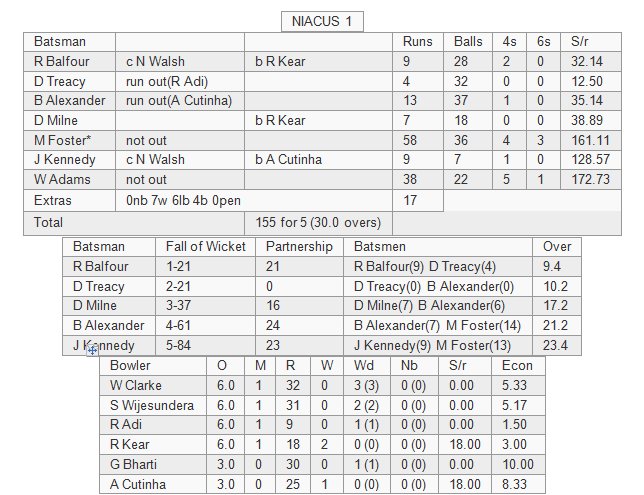 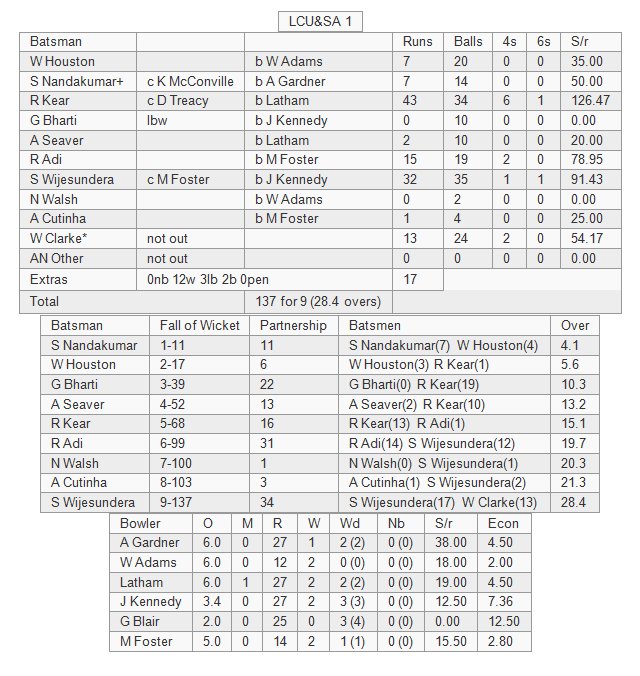