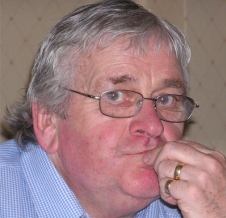 NIACUS is saddened to learn of the passing of former umpire and Honorary Secretary Ernie McCormick.

His two sporting passions were association football and cricket. His soccer involvement was largely on the administration side of things, involving secretarial and promotional duties variously with the IFA, Carrick Rangers and Ballyclare Comrades.

He played senior cricket for Cliftonville before moving on to Ballymena in the 1970`s and 1980`s. A medium paced seamer and middle order batsman he played in the 1981 Challenge Cup final at Downpatrick, losing by 38 runs to a Michael Reith inspired North Down.

When his playing days ended he decided to keep involved by becoming an umpire and joined NIACUS. He was soon umpiring regularly in the senior game and clearly relished the job, which was typified by his jovial and good humoured approach. He often described himself as "a players umpire" although I never quite understood what that meant.

He served as NIACUS Honorary Secretary from 2003 until 2005. A regular contributer to our now sadly defunct 'Follow On', his stories of outings to Leinster and North West umpires` dinners - although usually apocryphal - made hilarious reading.